"Thank you, Mr Bill Austin - my Lord Mayor.  Well, what a fantastic day this is! There were times, some years ago when we were in the planning stages, when we thought today might never happen. But here we are! It is happening. Excellent!

And thank you also, Hamish Wood, the Museum Manager, for asking me to say a few words. What better place to say them than here on the balcony just outside the new Sanitaryware Gallery ‘Flushed with Pride.’

I'm here to represent the sanitaryware industry. There are two main players in sanitaryware production in the UK - that's Twyford Bathrooms and Armitage Shanks - there is also a smaller company called the Thomas Crapper Company, and these three companies have been major sponsors in the development of the new toilet galleries.

Did you know that together they've contributed almost £100,000 in artifacts, cash and sheer hard work. And I can safely say, on behalf of the industry, we're delighted to see the results here today.

Twyford Bathrooms was one of the very ﬁrst industrial sponsors of Gladstone Pottery Museum when it opened way back in April 1975. In those early days the original sanitaryware gallery consisted almost entirely of the Twyford's Collection.

25 years ago that original sanitaryware gallery was put together for about £200 - a touch less than the £21.5 million affair we see today! And rather than the army of people that has worked on today's galleries, the original was assembled and curated almost single handedly by a very big friend of mine. She laid the foundations for the galleries and for today's event. Where is she? My big friend - the wife! Pam.

The new galleries really are really worth every penny, though, aren't they? Excellently designed and displayed it’s great to see how the sanitaryware industry has grown. How sanitation originated from its humble beginnings.  And it wasn’t so long ago was it? Just 120 years,  its nothing in the history of mankind!

And we know we can put down the development of sanitation to just a few Victorian men. Here in Staffordshire, Thomas Twyford was one of them. A local chap, Potteries born and bred! And we can be proud of him. His factory is still a major producer and employer in the Potteries. Around 3 million pieces of pottery go from our local factory every year. You know, I really do think it’s about time we created a statue of him in the City!

So today we open the excellent new sanitaryware gallery and congratulations to the Gladstone team for putting it all together. It remains for me to say that it really has been a delight working with the team. The industry has cooperated like never before and I must thank Sam Woodberry of Armitage Shanks and Simon Kirby of the Thomas Crapper Company. It’s been a pleasure working with them. And many thanks go to Hamish Wood, and Angela Lee and the team here at Gladstone, and to Munroe Blair the local sanitaryware historian who did the "sense" checking. And of course we shouldn't forget our Australian friend, Kellene Paul, who did much of the ground work for the displays.

So here we are the great day did arrive and we've now got the Official Civic Opening we longed for and we really can be Flushed with Pride!   Thank you."

The 'Victorian Vampire' film, 'Blood and Bone China' was filmed at Gladstone in 2011. This is a twelve part Victorian vampire web drama series, created and directed by award winning Stoke-On-Trent based film-maker Chris Stone and starring TV's Rachel Shenton.  https://www.youtube.com/user/BloodandBoneChina


2011 How to restore Gladstone's bottle ovens

BEFORE: First erect the scaffolding ...


From The Sentinel  |  Posted: January 06, 2012
Work is underway to bring three iconic bottle ovens back to their former glory. More than £350,000 is being spent on renovating the kilns at the Gladstone Pottery Museum, in Longton. It was feared the ovens could become structurally unsafe within a few decades if essential repair work was not carried out, after centuries of gradual erosion had taken their toll. But the £360,000 maintenance project, which is being jointly funded by Stoke-on-Trent City Council and English Heritage, will preserve the world famous bottle ovens for years to come. The work at the museum, which draws 50,000 visitors a year to the city from all over the world, is expected to around 12 weeks to complete.  Read more here>


2016 Another Gladstone oven is renovated

August: Gladstone's Bottle Oven No.1 is steadily being encased in a large amount of scaffolding as part of an essential maintenance project. The work is necessary to ensure the safety of museum visitors, and the long-term preservation of the bottle ovens. Failed mortar and spalled bricks will be replaced. More here>  Words and pictures by Nerys Williams, member of the Gladstone Museum Staff. 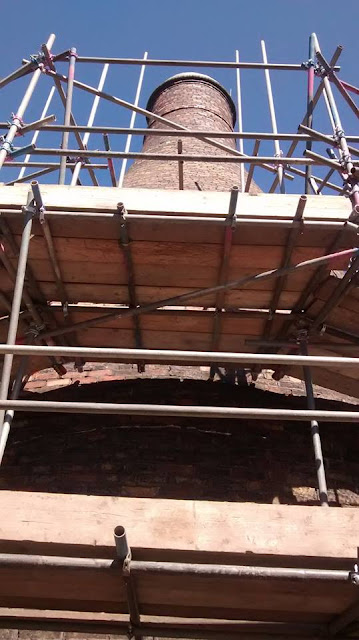 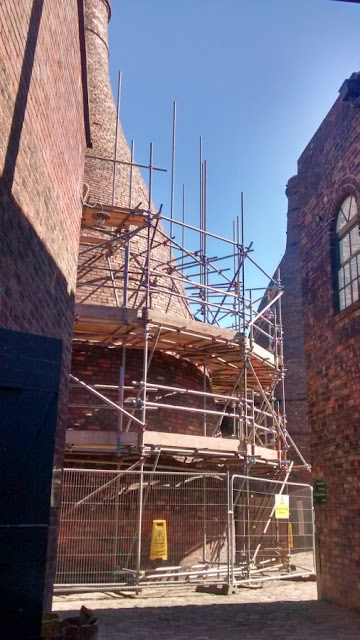 Take the Tile Trail from the The Gladstone Tile Gallery

The Gladstone Tile Gallery features one of the best decorative tile collections in the country and celebrates the ways in which ceramic tiles have given beauty and colour to floors and walls over the centuries. You can find out how tiles were made and decorated and enjoy the “art of the Tile” from Gothic to Art Deco.

INTRODUCTION by David Malkin
The idea of a tile gallery at the Gladstone museum was the inspiration of the late Derek Johnson,Chairman and Managing Director of H & R Johnson Richards Tiles Ltd, in the 1970’s. This company was formed following the merger in 1968, of Richards Campbell Tiles, Malkin Tiles (Burslem) Ltd with H & R Johnson, now known as Johnson Tiles Ltd. Thus interwoven into the structure of the new company were many of the famous names of the Victorian Tile industry. T & R Boote, Campbell Tiles, Malkin Edge, Maw & Co, Minton Hollins, and Sherwin & Cotton.

In the 1970's H & R Johnson Richards Tiles Ltd was one of the largest and most successful ceramic tile companies in the world, with factories on five continents. Derek Johnson wanted to show future generations how the British tile industry evolved at a time when working conditions were not as they are today. Yet in the 19th century the British ceramics industry lead the world in design, quality and innovation. Sadly, Derek Johnson died in 1977. The Gladstone Pottery Museum is a tribute to those men and women in the industry who made this possible.


"The Tile Trail starts here"
The logical extension of a visit to the Gladstone Tile Gallery is to actually ﬁnd some of the tiles made in the potteries in earlier times, and establish a signpost to follow a trail of tiles from Stoke on Trent. Look at the frontage of old buildings, the floors of churches, sometimes you will find tiles behind painted walls or under carpeted ﬂoors. They were applied as architectural decoration in Hospitals, town halls ofﬁces and shops as well as the smallest homes. It was said that at the end of the 19th century ceramic tiles became so popular that no household was complete without them. Not only was there a very healthy market for tile in Great Britain, but thousands upon thousands of tiles were exported to many parts of the world for use in similar situations as in UK. The fashion for tiles was beginning.

Tiles will be found in almost every part of Stoke-on-Trent. Look for them and then send your feed back to the Tile Trail History Pin. Examples of almost every type of Victorian English Tile are to be found in the Gladstone Tile Gallery. But it was not only locally that they were used. The enormous explosion of demand in the mid 19th century, and the entrepreneurship of the tile company owners such as Herbert Minton, Michael Daintree Hollins, George Maw, James Malkin, Thomas and Richard Boote, and Colin Minton Campbell and others, lead to their use in many countries of the world, which at that time wished to emulate the design trends in Great Britain‘ So wherever you are, particularly in the English speaking world, you will ﬁnd great interest in looking for examples of these tiles. Please send your ﬁndings to the Potteries Tile Trail History Pin.

This is a fascinating industry. Take the tile trail from Gladstone, follow the sign posts and see where they lead.

The Tile and Architectural Ceramic Society ( TACS )
Since 1981, this body has served as Britain’s national society which promotes the study and conservation of tiles and architectural ceramics. An international membership of individuals and institutions is drawn from fields of tile museums, conservation, manufacturing (both industrial and craft), architecture, design, tile collecting and antiques. www.tilesoc.org

The Potteries Tile Trail
The Tiles and Architectural Ceramic Society are leading this exciting partnership project. The society was successful in gaining a grant from the Heritage lottery Fund as part on the national All Our Stories initiative. The next stage of the project is now being considered. www.thepotteriestiletrail.org

Following national guidance, Gladstone Pottery Museum closed 'temporarily' on Wednesday 18 March 2020. All planned events were postponed or cancelled. "Our absolute priority is the health and welfare of our visitors, staff and the wider public as the nation deals with the impact of the coronavirus, Covid-19 pandemic. While our doors will be temporarily closed, there is a range of digital information that will still be available online. Please see the Gladstone Pottery Museum homepage of the website for more information in the coming days."
Update March 2021 - twelve months later and the museum remains closed.