Rescued from the bulldozer on 25th March 1971, the Gladstone Works in Longton, Stoke-on-Trent, is home to the most important group of bottle ovens remaining in the UK, and is now the "museum of the pottery industry".
Gladstone Pottery Museum is a restored potbank from the days when coal-burning bottle ovens were used to fire the world's finest pottery. There are five magnificent, towering ovens in this unique setting. If you are visiting Stoke-on-Trent then go to Gladstone first and you'll find out what the Potteries is all about.
This is the story of the Working Pottery Museum. When Gladstone opened to the public in 1975, after 4 years of restoration, it was one of the first museums to embrace the 'working' concept, and was a pioneer in UK museums. 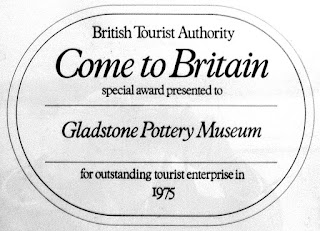 Half a century later, this multi award winning museum is a major visitor attraction and was officially England's Best Small Visitor Attraction 2020 - a 'Jewel in the Crown' of the Potteries. The entire collection of Gladstone Pottery Museum is a Designated Collection of national importance.

Gladstone Works, Longton's complete Victorian potbank, was rescued on 25 March 1971 just as bulldozers were set to move in. It is now an internationally renowned, multi-award winning and unique museum of the Staffordshire Pottery Industry. The entire collection of Gladstone Pottery Museum is a Designated Collection of national importance. 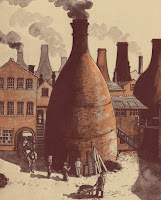 At the site, five magnificent and towering coal-fired bottle ovens still stand. Each can be explored, as can the cobbled potbank yard, the steam engine and sliphouse, the saggar making shop and the potters shops with live demonstrations. The galleries of sanitaryware, tiles and pottery colour give an insight into the complex and fascinating industry of the Potteries.

You can rest up in the tea shop for a break before you finish your visit exploring the souvenir shop packed with goodies. If you're planning a visit to the Potteries then you should go to Gladstone Pottery Museum before you do anything else.

This blog was created to recognise the remarkable achievements of Gladstone Working Pottery Museum during the 40+ years since it was opened officially by The Duke of Gloucester on 24th April 1975. The jewel in the Potteries crown.

The beginnings of Gladstone Pottery Museum

In October 1964 Reginald G Haggar, the local water colour artist and art historian, wrote to the Pottery Gazette and Glass Trade Review with his visionary thoughts about preserving a potbank for the benefit of future generations.

The editor of the magazine wrote  "In our news pages, Mr. Reginald Haggar, well-known author and artist, makes an impassioned plea for preservation of the historical Potteries in the form of bottle ovens (“beautiful”) and even a whole factory as a complete industrial museum. Those of us who love the area with all its character and idiosyncrasies would back his plea, and hope that something can be done to preserve the old, whilst acknowledging the benefit of modern methods in present-day production of the Six Towns.’

Here>   is Mr. Haggar's letter in full.
The germ of an idea and the beginnings of Gladstone Pottery Museum.

What there is to see here> 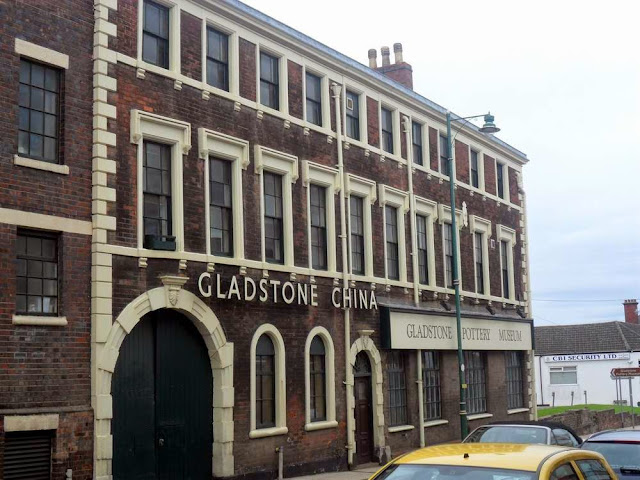 There is a certain fascination about that old potteries tradesman - The Saggar Makers Bottom Knocker.

What on earth did he do?!

Gladstone Pottery Museum, in Longton, Stoke-on-Trent is the only place in the world where you can learn about the saggar maker, his frame filler and his saggar makers bottom knocker.

It is here, tucked away in a corner of this remarkable multi-award winning museum that you can walk right into the saggar making shop and see where the craft of saggar making took place.

It's a small workshop, packed with the tools of the saggar maker and his bottom knocker. An introductory video and well written descriptive posters describe why a typical Stoke potbank would employ such a team of dedicated craftsmen.

The craft of saggar making and of the Saggar Makers Bottom Knocker have long since gone except when occasionally, very occasionally, the traditional skills are revived by one man, Kevin Millward, who was taught how to do it.

Here is a great movie "MAU'ING THE SAGGAR". A film by Gerald Mee 1981 showing the process of saggar making by the late Ralph Wheeldon - one of the four last saggar makers at that time working at the Gladstone Pottery.

The opening of the Flushed with Pride Gallery, March 2002


"Thank you, Mr Bill Austin - my Lord Mayor.  Well, what a fantastic day this is! There were times, some years ago when we were in the planning stages, when we thought today might never happen. But here we are! It is happening. Excellent!

And thank you also, Hamish Wood, the Museum Manager, for asking me to say a few words.
And what better place to say them than here on the balcony just outside the new Sanitaryware Gallery ‘Flushed with Pride.’


I'm here to represent the sanitaryware industry. There are two main players in sanitaryware production in the UK - that's Twyford Bathrooms and Armitage Shanks - there is also a smaller company called the Thomas Crapper Company, and these three companies have been major sponsors in the development of the new toilet galleries.

Did you know that together they've contributed almost £100,000 in artifacts, cash and sheer hard work. And I can safely say, on behalf of the industry, we're delighted to see the results here today.
Twyford Bathrooms was one of the very ﬁrst industrial sponsors of Gladstone Pottery Museum when it opened way back in April 1975. In those early days the original sanitaryware gallery consisted almost entirely of the Twyford's Collection.

25 years ago that original sanitaryware gallery was put together for about £200 - a touch less than the £21.5 million affair we see today! And rather than the army of people that has worked on today's galleries, the original was assembled and curated almost single handedly by a very big friend of mine. She laid the foundations for the galleries and for today's event. Where is she? My big friend - the wife! Pam.


The new galleries really are really worth every penny, though, aren't they? Excellently designed and displayed it’s great to see how the sanitaryware industry has grown. How sanitation originated from its humble beginnings.  And it wasn’t so long ago was it? Just 120 years, its nothing in the history of mankind! 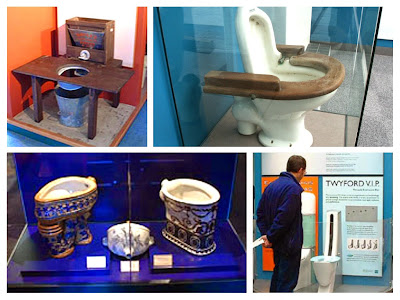 And we know we can put down the development of sanitation to just a few Victorian men. Here in Staffordshire, Thomas Twyford was one of them. A local chap, Potteries born and bred! And we can be proud of him.

His factory is still a major producer and employer in the Potteries. Around 3 million pieces of pottery go from our local factory every year. You know, I really do think it’s about time we created a statue of him in the City!

So today we open the excellent new sanitaryware gallery and congratulations to the Gladstone team for putting it all together.

It remains for me to say that it really has been a delight working with the team. The industry has cooperated like never before and I must thank Sam Woodberry of Armitage Shanks and Simon Kirby of the Thomas Crapper Company. It’s been a pleasure working with them. And many thanks go to Hamish Wood, and Angela Lee and the team here at Gladstone, and to Munroe Blair the local sanitaryware historian who did the "sense" checking.

And of course we shouldn't forget our Australian friend, Kellene Paull, who did much of the ground work for the displays.

So here we are the great day did arrive and we've now got the Official Civic Opening we longed for and we really can be Flushed with Pride!   Thank you."
more photos>

In October 1964 Reginald G. Haggar wrote to the Pottery Gazette and Glass Trade Review with his visionary thoughts about preserving a potbank for the benefit of future generations.

The editor of the magazine wrote  "In our news pages, Mr. Reginald Haggar, well-known author and artist, makes an impassioned plea for preservation of the historical Potteries in the form of bottle ovens (“beautiful”) and even a whole factory as a complete industrial museum. Those of us who love the area with all its character and idiosyncrasies would back his plea, and hope that something can be done to preserve the old, whilst acknowledging the benefit of modern methods in present-day production of the Six Towns.’

Here is Mr. Haggar's letter in full.
The germ of an idea and the beginnings of Gladstone Pottery Museum.