What you can see

Gladstone Pottery Museum - "The Museum of the Potteries"

Gladstone, now a multi-award winning museum and "Visit Britain's Best Small Visitor Attraction in England", is a fully restored, medium sized Stoke-on-Trent potbank from the days when coal-burning bottle ovens made the world's finest pottery.
Five magnificent, towering bottle ovens in a unique setting, with two more next door at the Roslyn Works. A stunning industrial museum of the pottery industry showing the story of pots, tiles, sanitaryware, ceramic colours, and all those supporting industries which are essential to a potbank. The most important group of buildings in the city Stoke-on-Trent.

"Familiar things like the vessels comprised by dinner, breakfast and tea services would be there but so too would many unfamiliar objects: the bell pulls, doorplates, key escutcheons and door knobs made by specialists in door furniture, the trinket sets that formerly adorned the dressing table and the toilet services for the obsolescent wash-tables, galley pots, whose name take us back to foreign trade in medieval times, creel steps and shuttle eyes made for Manchester cotton spinners, marbles and taws for children and parlour bowls for Victorian grown ups, nest eggs for poultry farmers, porcelain teeth, ceramic buttons, and a thousand other things."
Reginald Haggar 1964 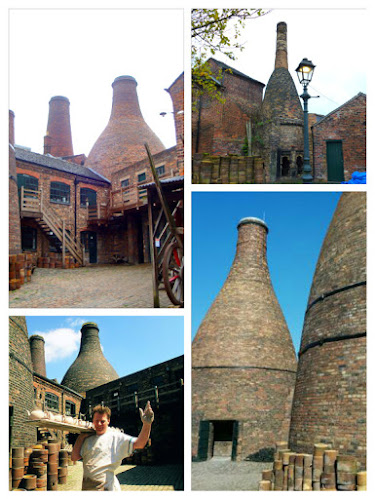 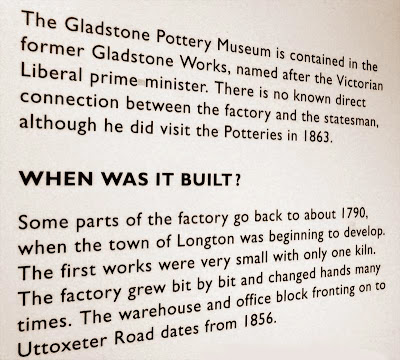 Visitors to the museum can see an introductory video which explains what the Gladstone Pottery Museum is all about, how it came to be and what there is to see.

The tunnel leads to the cobbled yard and is the main entrance to the potbank - its where raw materials were brought into the potbank from the road outside, and where finished pots were sent on their way to customers, worldwide.

The busy hub of the potbank. Raw materials arrive and are distributed throughout the workshops.  Finished goods leave the yard, through the tunnel and off to market. Today the yard is the scene of many local events, in a unique setting.


The engine house and steam engine

The steam engine drives the machinery in the pottery through drive shafts to the blungers and slip arcs and rope drives to other lighter equipment. The engine is a 1900s single crank tandem compound by Marshall and Sons of Gainsborough, Lincolnshire.

It was in the sliphouse or ‘sliphus’ that the pottery making process really began. Here, the raw materials used in the recipe for a pottery body were carefully blended and prepared for use by the potters in the factory.

Home of the Saggar Makers Bottom Knocker, the Frame Filler and the Saggar Maker himself.  Three highly skilled craftsmen without whom there wouldn't be a pottery industry!  You won't find this exhibit anywhere else in the world!


Here is a nine minute film showing the late Ralph Wheeldon - one of the last saggar makers in the Potteries working at the Gladstone Pottery in Longton during the making of the film in 1981.

Skilled potters regularly demonstrate  throwing, casting and bone china flower making. It's here that visitors can have a go ... !

This 18th Century throwing wheel is sometimes known as a Great Wheel. This particular throwing wheel is highly significant to Spode enthusiasts as it is actually a wheel from the Spode factory in Stoke - perhaps even used by those two important Spodes: Josiah Spode I, founder of the company, and his son Josiah Spode II. A remarkable machine in a remarkable setting. more here>

The ovens used for the first firing of the clay piece before decorating of glazing. During the biscuit fire the originally dry and somewhat crumbly clay changes irreversibly into a hard brittle pot called biscuit. A bottle-shaped structure, built from brick usually consists of two main parts, the outer hovel and the inner oven.

It was in the glost placing shop that biscuit ware which had already been dipped was carefully placed in glost saggars prior to its firing in the bottle oven. Ware was carried into the placing shop from the dipping house on ware boards which were stacked on the stillages or racks above the placers benches. Before being filled with were empty saggars had to be prepared for use. New ones were first washed inside with glaze since because they were slightly porous they tended to suck glaze from the ware inside them during the firing. Bit-stone (chips of calcined flint) was then spread into the bottoms of the saggars giving them a rough surface reducing the risk of ware sticking to the bottom. Used saggars were cleaned and the wad - bits remaining from a previous firing were knocked off with a metal tool.

The ovens used specifically for firing biscuit ware which had been dipped, or sprayed, with glaze. During the glost fire, the glaze developes matures and gives the pot a glossy surface.

The 'muffle kiln' is constructed in such a way that the products of combustion during the firing process are prevented from making contact with the ware, and thus causing it to discolour. The enamel kiln was used to fire pottery after the application of its decoration. Fired with coal, the usual temperature range is between 700°C and 800°C.

The biscuit or glost or finished ware houses received ware from the ovens. Men and women inspected the ware, and classified it into best, seconds, lump or worse than lump. After inspection best was sent to stock, seconds were repaired and made good, if possible, lump and worse than lump was sent to the shordruck.

Where the finished and fragile pots were packed into huge crates or casks with straw or woodwool before sending on their way to customers worldwide.

The 1890's Doctor's House creates an atmospheric and unique time-warp and provides an insight into the hazard's of working in Staffordshire's pottery and coal industries and the toll they took on workers' health. Sit in the waiting room and find out about diseases such as potters rot then be 'discharged' to explore the Doctor's consulting rooms and private kitchen.

What is now called the Doctors House and the adjacent enamel kiln was a potbank run as Longton New Art Pottery from about 1926 to 1938 by Roland Bott. Coincidentally, he was Pam Bott’s grandfather. Pam was a curator at the museum before her father mentioned any of this and was delighted to find the family connection.

Pam Bott, now Pam Woolliscroft, says, “At some time, my grandfather ran a business from what is now the 'Doctors House' at Gladstone Pottery Museum using the little enamel kiln at the rear of the property. He may have had other premises too, either before, during or after. The business was known as Longton New Art Pottery. My grandfather Roland Bott was interested in cellulose ware. He also decorated cheap earthenware and fancies and Toby Jugs bearing the Kelsboro Ware backstamp.'


The mould makers and mould store

The Tile Gallery features one of the best decorative tile collections in the country and celebrates the ways in which ceramic tiles have given beauty and colour to floors and walls over the centuries. Find out how tiles were made and decorated and enjoy the 'art of the tile' from gothic revival to art deco.

'Flushed with Pride' The quite remarkable and unique gallery dedicated to the history of sanitation, sanitary science, and sanitaryware. Lift the lid on the role that potters played in it's development. Follow the story of the WC from the time of Queen Elizabeth 1 through to the toilet of the future. The gallery features the sights, sounds and smells of a Victorian slum, through the development of the the humble loo and on to the avocado bathroom suite of the 1960s, the coloured suites of the 70s and 80s, and the bathrooms of the future.


What was made at Gladstone Works?

The tearoom is open to both museum visitors and the general public. Serving teas, coffees, soft drinks and light lunches with views overlooking the cobbled yard.


The souvenir and gift shop

A wide range of gifts including studio ceramics, local paintings, children's novelties, unusual items for the home, books and an extensive range of bone china florals and ceramic gifts made at the museum.