IN THE NEWS - latest first

2020 August - Gladstone is the BEST 'Small Visitor Attraction' in England 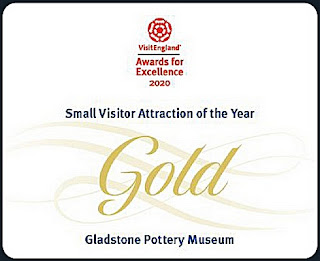 Supermarket giant ASDA has paid tribute to the Potteries with a unique chocolate sculpture. Staff members at the ASDA store in Bucknall - which opens in late June - have created it using 8kg of ASDA milk chocolate. The confectionery was carved, crafted and sculpted to resemble two unique bottle ovens at Gladstone Pottery Museum. (Courtesy: The Sentinel more here>)

Grant to improve welcome area. Gladstone's audience development officer, Nerys Williams, said: "It's very much the beginning of the process, but we're calling the project a 'warm welcome'. We've just had the damaged bricks replaced and the scaffolding come down on one of our bottle kilns, which is exciting. Now we want a better greeting for our visitors. At this stage, we are thinking about how we are going to do that."  More in The Sentinel report here> 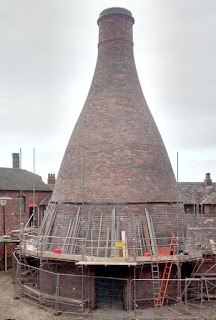 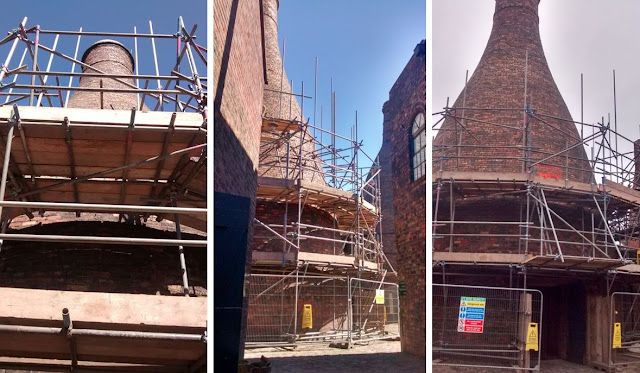 Gladstone's Bottle Oven No 1 is steadily being encased in a large amount of scaffolding as part of an essential maintenance project. The work is necessary to ensure the safety of museum visitors, and the long-term preservation of the bottle ovens. Failed mortar and spalled bricks will be replaced. More here>  Words and pictures by Nerys Williams, member of the Gladstone Museum Staff. 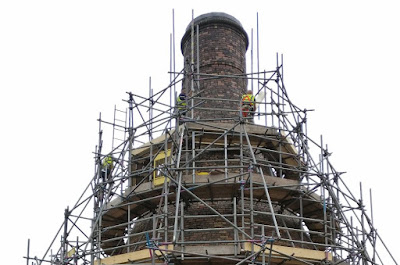 Update: December 2016: Job Done! and the scaffolding comes down.

Potteries Eye  01 February 2016
Stoke-on-Trent City Council are set to splash just under £1/2 billion in a bid to boost the city's fortunes over the next five years. Stoke-on-Trent City Council’s cabinet will consider investment proposals totalling £473.5m under its five-year capital programme till 2021 including £1.9m to revamp and improve the Gladstone Pottery Museum (which remains the city’s number 1 visitor attraction) and the Potteries Museum and Art Gallery. With visitor figures continuing to increase, and interest in the pottery heritage growing, the investment will help to improve the overall offer for culture and heritage in the city.

Courtesy of  The Sentinel  |  Posted: November 18, 2015  |  By Tom Burnett
Gladstone Pottery Museum scooped silver awards in the Small Visitor Attraction of the Year category and for its 40th anniversary celebrations earlier this year.

PESKY pigeons who set up home in a museum's bottle oven have been forced to find another place to roost.  Scores of the birds had been settling down in one of the four ovens preserved at Gladstone Pottery Museum, in Longton, causing disruption for workers and volunteers. Now – after Stoke-on-Trent City Council approved an application to put up camouflaged nets – the pigeons have been blocked from staying at their favourite nesting spot. Staff at the museum say they are relieved as the potbank 'coo' has seen fewer birds target the area. Museum manager Angela Lee said: "It seemed to be a feature of this year, in that the pigeons were looking for somewhere to roost and they took a liking to one of our bottle ovens. I think once a few thought that this was a good idea, lots of others then liked it and followed them, and it started to become a bit of a problem. Obviously, we were concerned that it could become a health and safety issue, from the birds themselves and from the mess they create. We had to do something about it. There has been a noticeable difference since the nets went up."

Gladstone Pottery Museum has been officially named one of the best places to visit in England.

Gladstone Pottery Museum picked up a bronze award for ‘Small Visitor Attraction of the Year’ in the 2015 Visit England Awards for Excellence. 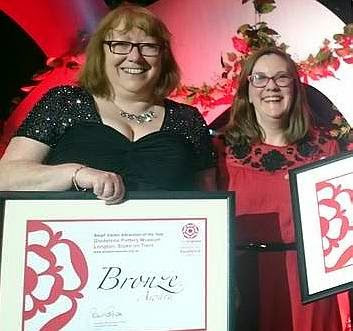 At an awards ceremony in Gateshead on 11 May 2015 Angela Lee (Museum Manager) and Nerys Williams (Audience Development Officer) received the Bronze Award.   The VisitEngland Awards for Excellence are the most prestigious awards in English tourism.
THREE YEARS = THREE AWARDS
Gladstone Pottery Museum picked up a gold award for ‘Small Visitor Attraction of the Year’ in 2013 and again a year later in 2014, in the Enjoy Staffordshire Tourism Awards.

So now its official:  Gladstone Pottery Museum is one of the top three small visitor attractions in England. Still winning accolades and awards after 40 years! 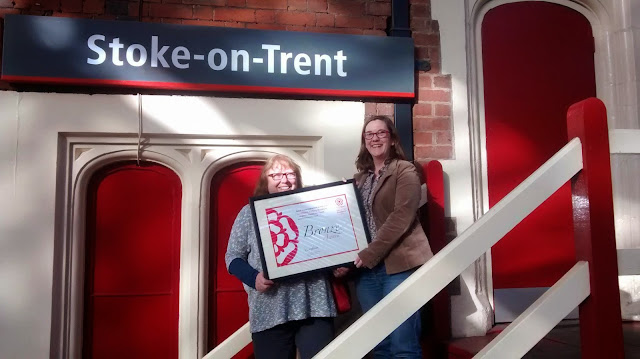 2015 May - Finalist : The Visit England Awards for Excellence

Many congratulations go to Gladstone Pottery Museum who have been announced as finalists in the shortlist for this year’s VisitEngland Awards for Excellence, Small Visitor Attraction of the Year

2015 Awards Ceremony – 11th May, Sage Gateshead
The Awards Ceremony is the climax of the whole VisitEngland Awards for Excellence competition. By making it to the Ceremony all finalists will have demonstrated that they are the very best of English Tourism.

The Ceremony celebrates success and excellence and is a showcase for England's fabulous tourism products. Above all it provides finalists with a moment of well-deserved glory which can be used to market, promote and improve their businesses still further.

So now its official:  Gladstone Pottery Museum Story is one of the top five small visitor attractions in England. Still winning accolades and awards after 40 years!

GLADSTONE Pottery Museum has been officially named one of the best places to visit in Staffordshire. The Uttoxeter Road attraction scooped a gold award in the second Enjoy Staffordshire Tourism Awards this week. The Longton museum took the top spot in the small visitor attraction of the year category – beating Go Ape! in Cannock Chase and the Emma Bridgewater Factory Shop. Nerys Williams, Audience Development Officer at the museum, said: “It was a fantastic surprise to get the gold award for the second year in a row. We do our best to be a family-friendly attraction and we try to offer a wide range of events to people who otherwise might not visit museums.

"Whereas hundreds of potbanks once covered the city, now only one full site remains – and only thanks to the work of dedicated volunteers and far-sighted philanthropists." Gladstone Pottery Museum


2014 - News article courtesy of The Observer 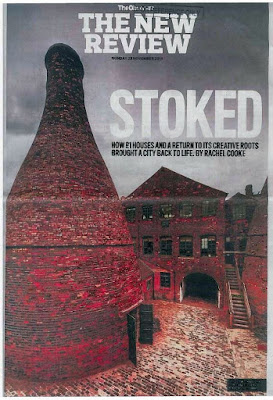 STAFFSLIVE  :  December 3, 2013
Longton residents have joined forces with campaigners to fight cuts they fear threaten the future of award-winning Gladstone Pottery Museum. A packed meeting of Dresden Residents Association agreed to fight proposals by Stoke-on-Trent City Council to cut “hands on” activities at the museum built in 1787. Phil Rowley, a volunteer at the museum that won Best Visitor Attraction Gold Award at the Staffordshire Tourism Awards last month, told the meeting that the activities were key to maintaining visitor numbers. The 61-year-old told StaffsLive: “Gladstone has won a number of awards in recent years. “The activities have been central to the museum’s offer, and any cuts will almost certainly see visitor numbers fall which will ultimately affect its viability.” 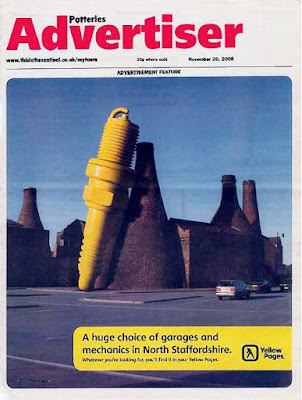 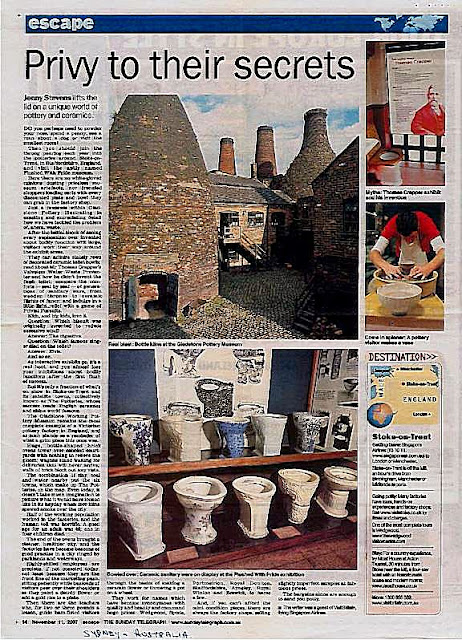 2002 February - From The Evening Sentinel "The Way We Were" 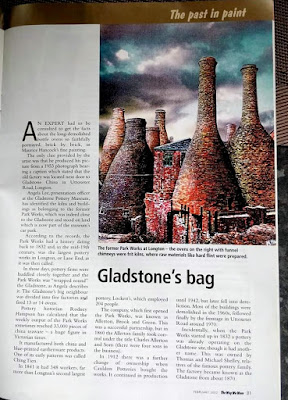 Trades from the Past -  The Saggar Makers Bottom Knocker


2001 March - All Cisterns Go! A Tribute to the humble lavatory 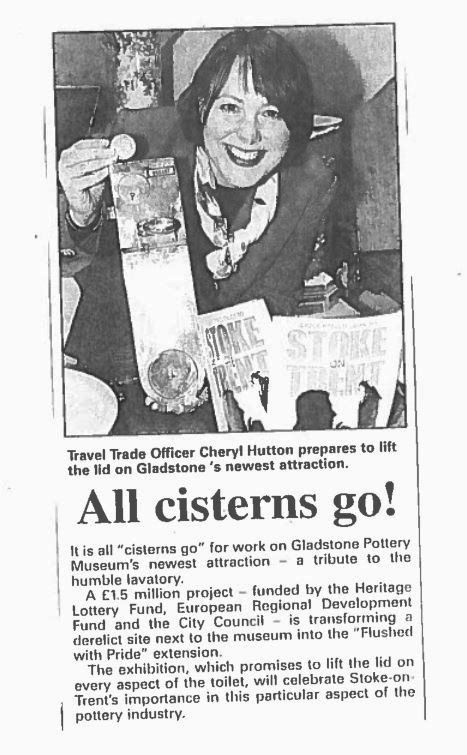 2001 March - Secrets of the smallest room 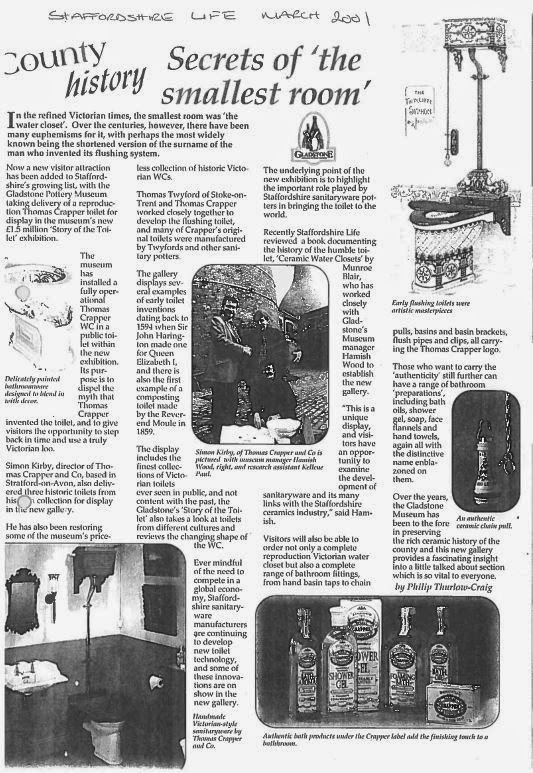 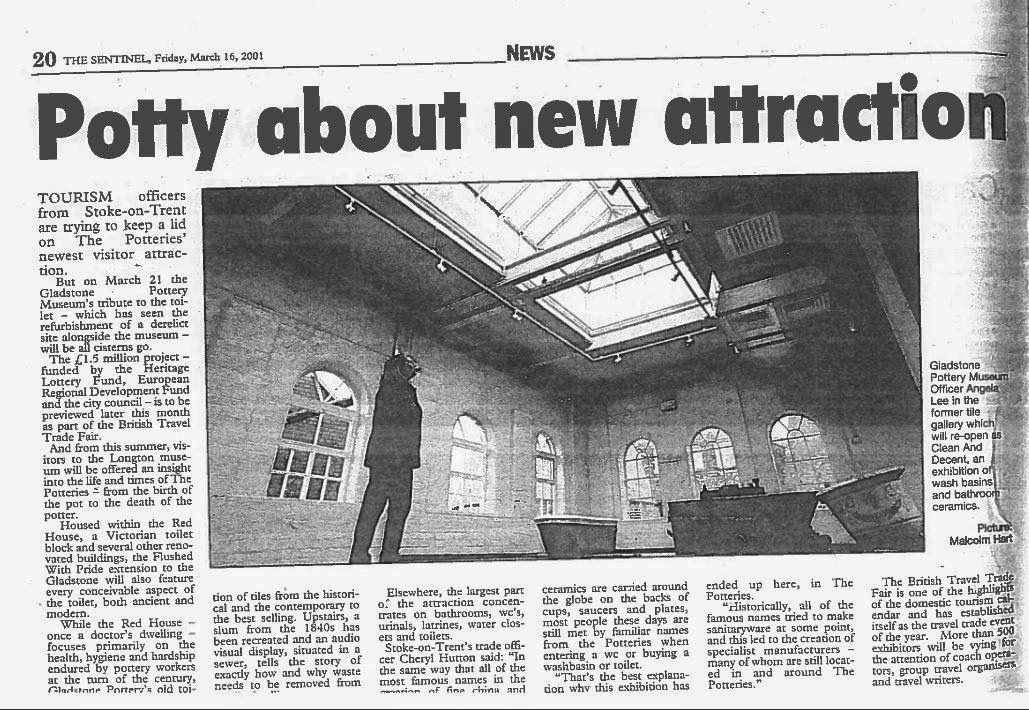 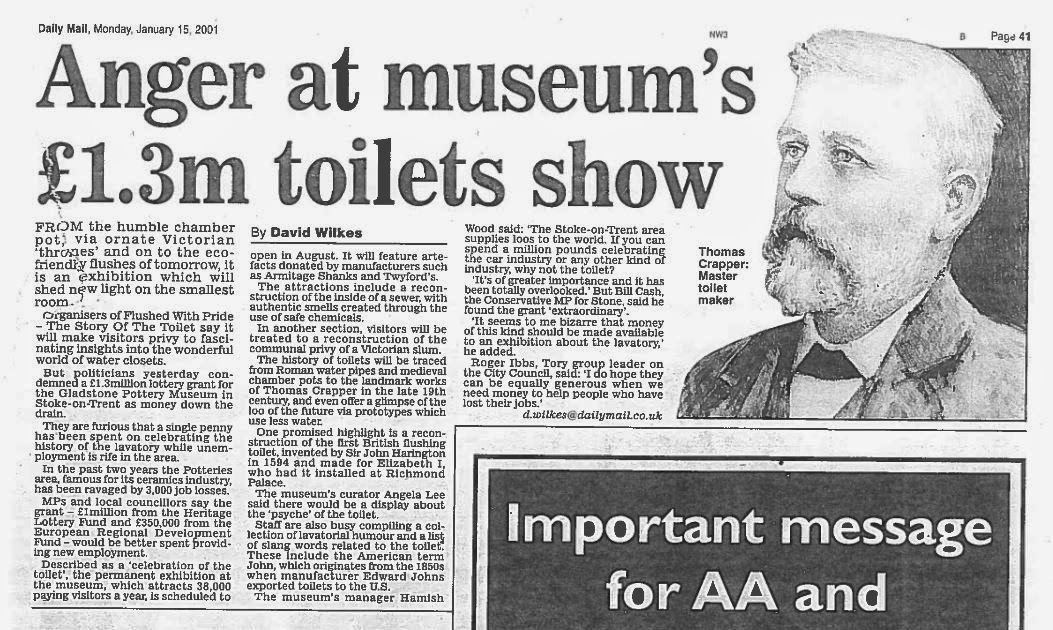 Twyford Bathrooms donates its collection of toilets to Gladstone

1999 February - Cuttings from The Sentinel and City News

Cutting from The Sentinel August 1995